Well I took the fact that bits of scabby skin had started to fall off my toe as a good sign, so on Thursday I took it out for a little run.  Just four miles along the canal from work, with the HR nice and low but the legs feeling they were being worked pretty hard.

The next day I had intended to get out at lunch, but made my excuses but just as I was about to get in the car and go home for a beer after "one of those days" I saw my bag and gave myself a bit of a talking to and did another four miler.  And my legs again found it hard work.  More needed, I think.

No biking this week, until Lily requested my company on a trip up to the ice-cream place at Halton East, so I pooled up there with her and glowed with pride as she dug in and rode up the hill without getting off for the first time.  Nice one, Lils. 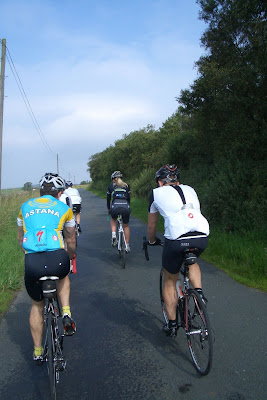 Then today I had volunteered to lead the "B1" ride at Ilkley CC, so I was committed to turning up.  Herb persuaded me to ride from home, and Vic tagged along for the ride too.  A gentle 9 1/2 mile warm up to the old bridge, then we were off with a group of eight, all of whom looked distinctly lithe and fit, and as there was no "A" ride today I was worried that perhaps I'd be lading from the back.

And so it proved - I'd selected a very lumpy route, going up from Askwith, over to West End, then up to Greenhow before dropping into Pateley and climbing up again to Dacre, Menwith Hill and final over Norwood back to Otley.

I was near or at the back on every climb, a stark reminder of just how much I've let myself go this year.  When we get back from hols it's diet, running and exercise needed.

By the time Herb and I got back to Embsay we had 60 miles on the clock, a shedload of ascent and tired legs.  On putting it into Rubitrack, this is my second highest bike mileage month ever with 370, so another couple of those should see my belly reducing and my legs getting stronger.

More running this week, methinks, and another weekend of bike miles before Tuscany and a full size chain set awaits...

PS Oh, and Bob - if you want a gnarly local climb get your arse up Ellers Rd out of Sutton - gnarliest of the gnarly.
Posted by andy from embsay at 13:32